Who Discovered Bromine? It is a chemical element that uses the symbol Br on the Periodic table. It belongs to the same chemical group as chlorine. Meaning that they are both halogens; however, Br is the third lightest halogen. This swimming pool chemical was discovered by two different chemists Carl Jacob Lowig and Antoine Balard  in 1825 and 1826 respectively.  Lowig discovery was made when he used a chemical solution of mineral salt saturated with chlorine and extracted the bromine with diethyl ether.  After the evaporation of the ether, a brown liquid remained.

Where as Antoine discovery was made while he was investigating some salty water from Montpelier France.  Balard also found out that chemical has an atomic number of 35 and an atomic mass of 79.904.

At room temperature, liquid bromine fumes up as a liquid gas that is a reddish brown or a brownish-red color.

Is Bromine A Disinfectant? Over the years the swimming pool and spa industry have noticed that bromine is a great disinfectant or sanitizer and can be used an alternative for chlorine in swimming pool sanitation. It was discovered that just like chlorine, Bromine can fight against the formation and growth of algae, bacteria and other odors in pool water where it is mainly present as hypobromous acid (HOBr) in the water.

It was also discovered that Br had good algicidal properties - making it a good oxidizer as well. Chlorine, which is recognized by the symbol CL2, comes in several different forms. One of which is a gas; however, elemental bromine comes in the form of a heavy brownish-red liquid - as was mentioned before.

What is the Chemical Properties of Bromine

Bromine in its elemental form, is not available for use in spa and swimming pool sanitation as a disinfectant. But there are several other known compounds that are currently in use. These are organic compounds that release bromine in the form of hypobromous acid.

For delivery hypobromous acid (HOBr) to swimming pools and spas, two methods that are currently in use. The first of these two methods is limited in its use when it comes to small volumes of water. It is also not recommended for use in commercial swimming pools.

The hypobromous acid developed through this method, comes from Sodium Bromide - which has to be activated by an oxidizer called Potassium Monopersulfate. This method of developing and delivering hypobromous acid disinfectant is called the two part system. The second of the two methods that are used to deliver hypobromous acid to the water of swimming pools and spas, use a solid form of bromine.

This solid form of bromine is bound to an organic molecule. In this method of delivery, a swimming pool chemical feeder is used. The solid compound is dissolved in the erosion feeder before it is injected into the pool water. These types of systems are normally controlled by a pool water monitor - which operates an electronically controlled solenoid valve, located on the discharge side of the erosion feeder.

The pool monitor opens and closes this solenoid valve depending on the settings that have been imputed into the unit. In swimming pool care, organic compounds are used in commercial pools and spas. It is not the elemental form of Bromine. 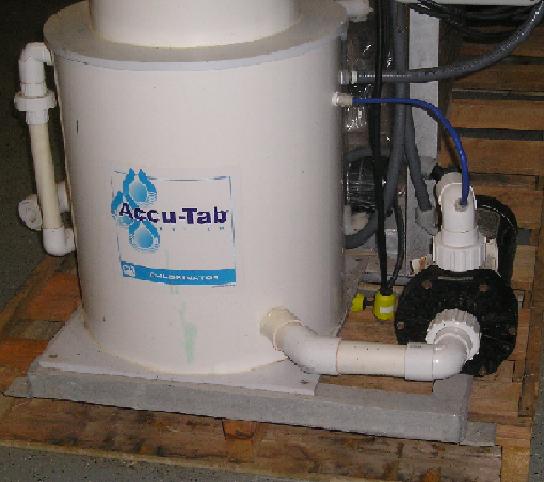 As with the chemistry of pool chlorine, these compounds are formed when ammonia is present in the water of your swimming pool or spa.

Organic bromamines to some are an excellent form of swimming pool disinfectant.

And it is believed that - compared to chloramines, they have less odor and are less irritating to the eyes and mucous membranes of humans. Because of these great properties of Br, pool chemicals that release hypobromous acid from organic bromine, have gained a wider acceptance in spa installations.

Is Bromine Found In Tap Water? Besides swimming pools, bromine is naturally found in the earth's crust and in seawater in various chemical forms. You may also be curious as to what it smells like? It is a toxic reddish-brown liquid at room temperature as I mentioned earlier. It has a very strong odor that can irritate the eyes, lungs, and throat. Its hard to describe the strong smell but it has been reported by people who said that the it is a chemical smell that is given off.

Advantages of Bromine Use

Pool chemicals that release bromine, are oxidizers; however, they are not as strong as chlorine. Some of the known advantages of bromine uses as a swimming pool or spa sanitizer are as follows:

One of the main advantages of bromine uses in swimming pools and spas - is the fact that the residual concentration is low and no separate substances are required for its removal.

Disadvantages of bromine Use

With the use of swimming pool chlorine some disadvantages will be encountered. The same holds true with using bromine. One of the main disadvantages of using bromine, is that its initial costs are much higher than that of chlorine. However, over time the user will see savings in the cost of this pool chemical.

There are other disadvantages that are well known in the spa and swimming pool industry. They are as follows:

The Efficiency of Bromine Use

As I mentioned earlier - the bromamines that are developed from bromine use, maintain their killing power in water that has ammonia present; thus, making them just as effective as free chlorine. This literally means that they kill pathogenic micro-organisms in the water of swimming pools and spas.

The organic form of bromine that is used for swimming pools and spas are available in tablet form. However, because this swimming pool chemical is so stable in water - its odor on the skin is much harder to wash off after a good swim.

Although the bromamines maintain their ability to sanitize a swimming pool or spa effectively, studies reveal that they are far more carcinogenic than chloramines.

What does this mean? Well - it means that they are very cancerous to individuals. This could be the main reason why, many owners/operators of swimming pools and spas are aggressively seeking or implementing other means of sanitation methods such as chlorine and UV light instead of bromine.

Have your say about what you just read! Leave me a comment in the box below.

[?]Subscribe To This Site
Copy Right © 2008 by WWW.Swimming-Pool-Care.Com. All Rights Reserved.